Building a Sustainable Gardening Community with Will Allen – 5-10-14

Gardening can happen anywhere, and there is no better example of that than the work of Growing Power. With a mission to inspire communities to build sustainable food systems that are equitable and ecologically sound, one food-secure community at a time, they are making sure that gardening thrives in urban settings in the Midwest.  Their goal is a simple one: to grow food, to grow minds, and to grow community.

Growing Power is celebrating its 20th anniversary of providing safe, affordable and healthy foods to communities. Since 1993, they have worked at building community relationships, offered training and hands-on experiences that have made them a national leader of the Good Food Movement.  Growing Power transforms communities by supporting people from diverse backgrounds and the environments in which they live through the development of Community Food Systems.  These systems provide high-quality, safe, healthy, affordable food for all residents in the community.

Over 3,500 individuals receive tours of the Community Food Center each year; and Will Allen, Growing Power’s Chief Executive Officer, has been the keynote speaker at several national conferences and the recipient of numerous local, state, and national awards and recognitions. 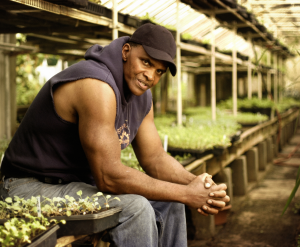 Our Guest this week is Will Allen, Chief Executive Officer of Growing Power believes, “If people can grow safe, healthy, affordable food, if they have access to land and clean water, this is transformative on every level in a community.  I believe we cannot have healthy communities without a healthy food system.”

Will Allen is the son of a sharecropper, former professional basketball player, ex-corporate sales leader and now farmer.  He has become recognized as one of the preeminent thinkers of our time on agriculture and food policy. The founder and CEO of Growing Power Inc., a farm and community food center in Milwaukee, Wisconsin, Will is widely considered the leading authority in the expanding field of urban agriculture. At Growing Power and in community food projects across the nation and around the world, Will promotes the belief that all people, regardless of their economic circumstances, should have access to fresh, safe, affordable and nutritious foods at all times. Using methods he has developed over a lifetime, Will trains community members to become community farmers, assuring them a secure source of good food without regard to political or economic forces. In 2008,

Will was named a John D. and Katherine T. McArthur Foundation Fellow and was awarded a prestigious foundation “genius grant” for his work – only the second farmer ever to be so honored. He is also a member of the Clinton Global Initiative, and in February 2010, he was invited to the White House to join First Lady Michelle Obama in launching “Let’s Move!” her signature leadership program to reverse the epidemic of childhood obesity in America. In May 2010, Time magazine named Will to the Time 100 World’s Most Influential People.

On May 10th, 2012, Will Allen became a published autobiographer of the book, THE GOOD FOOD REVOLUTION: Growing Healthy Food, People, and Communities (Penguin/Gotham Books).

We are honored to have Will as our Guest this week.  You can learn more about Will and Growing Power Inc. at www.growingpower.org.