Change is challenging for anyone, but relocating from one side of the country to another is a lot of change, and to move from the traditional culture of India to America is especially significant.  As we wrap up our series of shows on journeys, we have a discussion with someone who made this physical and emotional journey, and find out what lessons came along with this significant life shift. 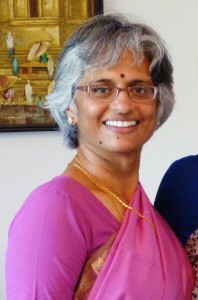 Sharadha Natraj was born in Calcutta, India. She received a Bachelor of Arts degree in German from Bombay University, with the intention of becoming a translator for technical documents in German and Japanese. Her plans abruptly changed when she moved to the Midwestern US in 1985, shortly after her wedding.  Once in the US, Shardha received a graduate degree in Library Studies from the University of Michigan in Ann Arbor.

She has been a librarian since 1988, and has worked in research and public libraries, notably the Holocaust Memorial Center Library in West Bloomfield, Michigan and the Wauwatosa Public Library. She currently works at the University of Wisconsin-Milwaukee School of Architecture and Urban Planning, where she is the Director of the Resource Center, provides guidance to students with research and job searches, and is the Executive Assistant to the Dean.