The Possibilities of Positivity with Melissa Hevenor – 8-20-16

We continue our series speaking with “People You Should Know”.  Our guest this week has her own remarkable story of overcoming physical circumstances since childhood, while also pursuing her deeply-felt calling to use her natural gifts to help others.  Join us this week to hear from someone you should know, Melissa Hevenor. 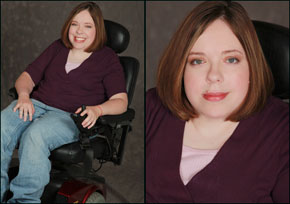 Melissa Hevenor is an inspiration and role model for those seeking to overcome all obstacles put in front of them, and to be deeply committed to using their natural gifts for good. As a child, Melissa was diagnosed with Cerebral Palsy and   gets around in a wheelchair, which has never limited her life experiences or ability to succeed. She sees her condition as a blessing that enhances her connection to spirit and makes her message of love and positivity ten times more powerful.  She uses her natural intuitive and divine gifts as a sought-after spiritual guide and teacher to people all over the world. Melissa is also a published author of her autobiography “Life with Robin”, and recently sold two of her songs to performing artists.

Melissa’s journey to her current work as a medium and professional psychic began at the age of four when she had her first encounter with her guardian angel, Robin. By the age of seven she was having regular interactions with the departed and was able to see into the future. Melissa believed that these were every day experiences for everyone until she realized that she was able to tell her classmates in grade school when there was going to be a pop quiz and others could not. But during much of her childhood and adolescence, only her closest friends and family knew about her psychic and mediumship abilities.

Melissa was drawn to studying psychology and the arts. She excelled in music and writing. Eventually earning a Bachelors degree in psychology as well as a Bachelors in theater, with an emphasis in creative writing from Florida Atlantic University. Her joy for helping others compelled her to get a minor in education. Before beginning her work toward her Masters degree, she decided to reach for the stars in Hollywood, California, landing a internship on the daytime drama “General Hospital” working in the film editing department. During this time Melissa continued to take screenplay writing workshops and classes. In her “spare time” she also wrote commercials for television and special events.

Melissa later returned to Florida to further her education completing her Masters degree in mental health and a second Masters degree in rehabilitation counseling while working three jobs as a therapist. Melissa worked with diverse populations including children removed from unfit homes, children on the autism spectrum and with adolescents with addictions/conduct or behavior disorders. Melissa soon became the head of the crisis hotline through the mental health clinic where she was working. Melissa decided to leave the comfort of the mental health field to embrace her true calling as a spiritual advisor.

Melissa has developed a thriving business with clients all over the world which includes a large fan base in United States, Australia and Europe. She was asked to host her own radio show on a spiritual Internet radio network. Her show called “Latte of Heaven” has a world wide following. She currently has a large fan base on social media and is in the top 10% of the business users on LinkedIn. Over the years Melissa has become known as ” the psychic in your pocket” for her willingness to serve as a spiritual teacher to answer common questions asked by the public about spiritual wellness and her experiences as a psychic/medium.  Melissa works with local medical practitioners to help promote wellness and to devise holistic treatment plans.

For more information about Melissa, please go to her website at http://www.melissahevenor.com/.